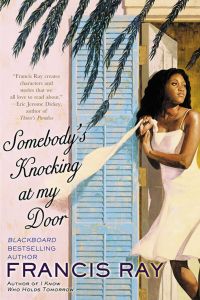 By Francis Ray In Against the Odds Series and Books

SOMEBODY’S KNOCKING AT MY DOOR

Kristen Wakefield grew up the privileged, beloved daughter and sister of a wealthy family…yet she felt eclipsed by the achievements of her older brother, Adam, a renowned neurosurgeon. In New Orleans, Kristen believes she now has the opportunity to prove herself and forget a rather disastrous past relationship. But life is much harder than she expected in the Big Easy. Then she meets a man from her past, Rafe Crawford…a man battling his own demons and keeping his own secrets.

The beautiful, but down-to-earth Angelique Fleming has always had to fight to get what she wanted in a world dominated by men and she has the chip on her shoulder to prove it. Which is why she takes great pleasure working at a local strip club, hoping to expose a few naughty little secrets of the community’s upstanding men. But before she gets all the dirt, she’s going to find out a few things about life, men, and forgiveness she thought she already knew.

Claudette Thibodeaux Laurent comes from old New Orleans money and had always adhered to the family code: honor above all else. But she shocks polite society when she marries a man much younger than herself, a man everyone suspects is only after her money. Claudette has done her duty to her family and now she wants a little happiness for herself. And yet doubts eventually begin to creep in and she isn’t sure which Maurice loves more: her or her money, as his desire for the finer things in life become more and more lavish. Just exactly how much is her happiness is going to cost her?

Romantic Times (2003) declared that “This novel is Ray’s finest work to date….A powerful story!” For those who have not had the opportunity to read this wonderfully “compelling story about family, love, and relationships” Lillian Lewis, American Library Association (2003), here is an opportunity to read a rare novel from Francis who is known for her Grayson’s of New Mexico and Grayson’s Friends (Texas) series. This story based in New Orleans came to Francis in a dream. In her dream she saw a women sitting in a rocking-chair and wondered why she was sitting in that chair rocking…. From such a simple dream, a tender novel was created. Such was the beautiful heart and creative genius known to all as Francis Ray!

Originally published May 2003 in trade paperback.