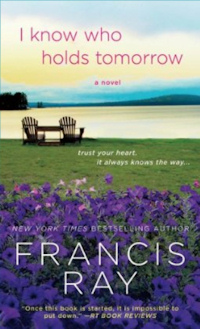 I KNOW WHO HOLDS TOMORROW

In her mind’s eyes, she could see Wes, tall and elegant in his tailored tuxedo with a patterned vest, black tie, and snow white pocket square. Her red Valentino slip gown highlighted her honey-eyed complexion and chocolate brown eyes. The gown also picked up the red in Wes’s vest and the red in the rose in his lapel.

They were the perfect couple and it was show time. And she wanted to scream.

Madison Reed, popular talk show host and America’s darling and her husband, well-known TV correspondent Wes Reed is everyone’s idea of the perfect couple. But now after the loss of their child, they became no more than polite strangers, maintaining the facade, revealing only picture perfect happiness. But Madison’s world is turned upside down when Wes is critically injured in a car accident and a woman is killed. Before he dies, Wes confesses that the woman who was killed was his mistress—and that he is the father of her nine-month-old daughter, Manda. He begs Madison to raise the child. Unsure if she can, Madison struggles to take charge of her fate and put her life back together. Overwhelmed, she accepts the help of Zachary Holman, her husband’s best friend, only to discover that his life is also shrouded by lies. Can she forgive and forget—not just once, but twice?